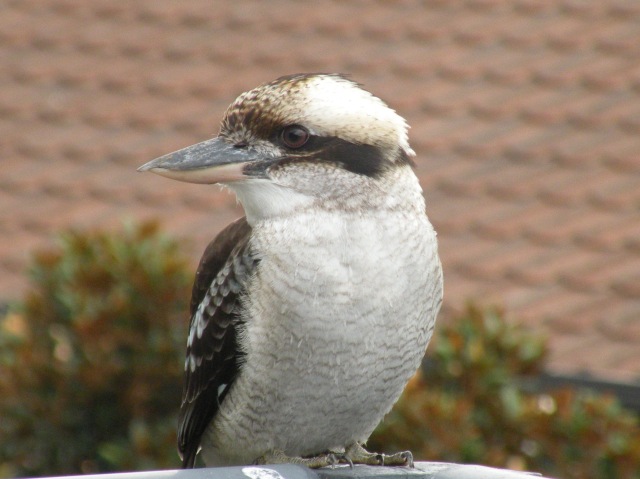 Welcome to our second newsletter for the year. Much has happened since March. Later on in this newsletter you can read about our excursion to Tootgarook in May and also the wonderful guest speakers who visited our meetings in April and June.

Our next meeting is on Saturday 15th July  at 2:30pm at Bentons Square Community Centre. Our speaker is Neil Marriott and the topic is Growing Grevilleas. Don’t miss out on this special event. 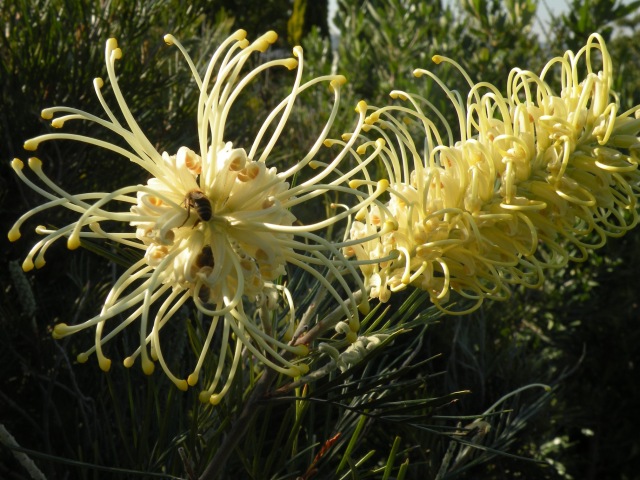 Also coming up is the Annual Planting Day with Ranger Sam Pollard at Devilbend Reservoir on Saturday 29th July at 9:30am.

Parking at the swing gate along Derril Road as there is no parking on the block we are planting.

Remember you can click on the Calendar tab at the top of any page on our website for details of all this year’s upcoming events as well as details of previous 2017 meetings and excursions. 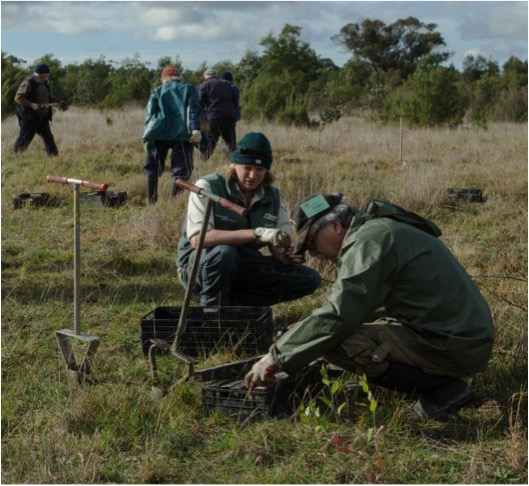 As you know I like to feature plants that are catching our attention each month in the garden as they flower, so here are a few that I hope appeal to you as much as they did to Karen and I.

Plant of the Month – May

Our Corymbia is a late flowering form but it certainly lit up the garden and attracted many bees during May and right through June too. 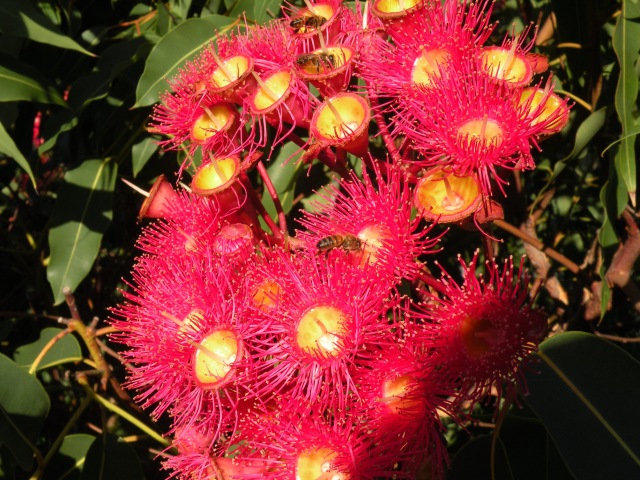 Plant of the Month – June

There’s nothing like a Hakea laurina for its beautiful pincushions 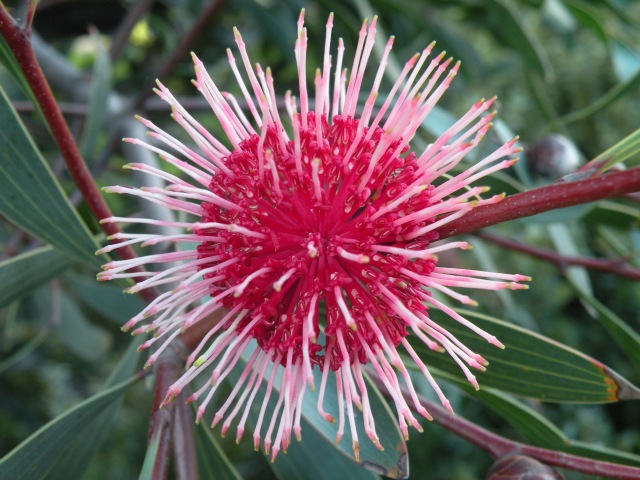 but we were really excited to see the blaze of colour when our Hakea ‘Burrendong Beauty’ flowered for the first time in June. 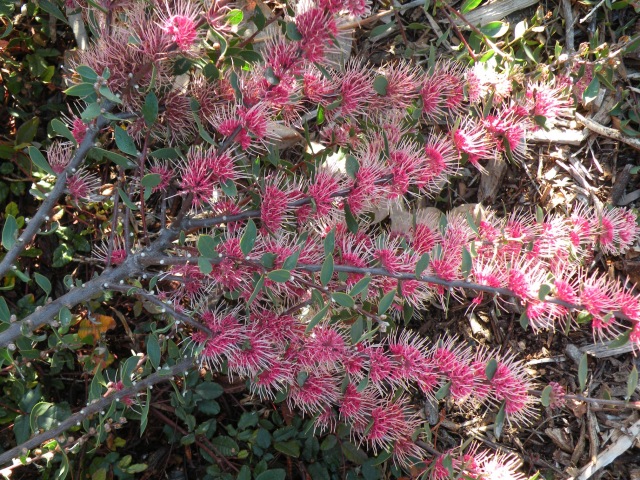 What do you think? Perhaps you have another Hakea which wins your vote. Remember I am always on the lookout for member plant inclusions in this section of our newsletter so if you have something flowering in your garden you are fond of why not share your love of it with us. Just send a photo (less than 1Mb in size) with a brief description of where it is growing, preferred soil conditions and why you like it, to our email – mornpenaps@gmail.com marking it Attention:Mark Allison

Our final Plant of the Month is a lovely Banksia baueri (Woolly banksia) from our leader Verena Reich’s garden. Well suited to the sandy soil in Rosebud its huge woolly cones are fantastic to touch. Thanks Verena.

Plant of the Month – July 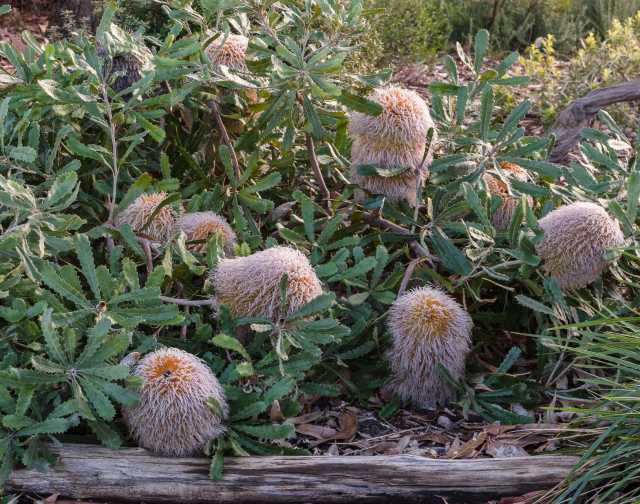 Our speaker was Chris Long, APS Victoria President, who also doubles as our group’s Treasurer. His chosen topic: Gardens, Gardeners and APS Victoria. Chris began by highlighting the benefits of being involved as members of APS Victoria. From there he spoke about ‘grand’ gardens, ably supported by some wonderful photos in his PowerPoint presentation. Chris also talked about health benefits of being in our gardens before talking about the need for diversity in gardens. He concluded with some wonderful photos of some spectacular Australian native specimens. 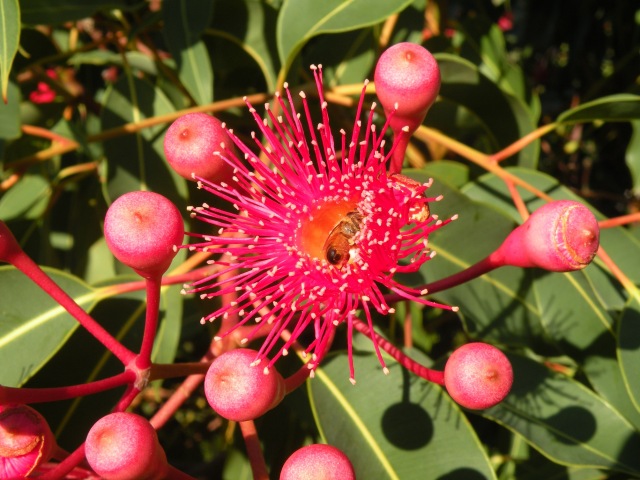 Our annual Plant Sale was held at Seawinds on a day of mixed fortunes weatherwise. 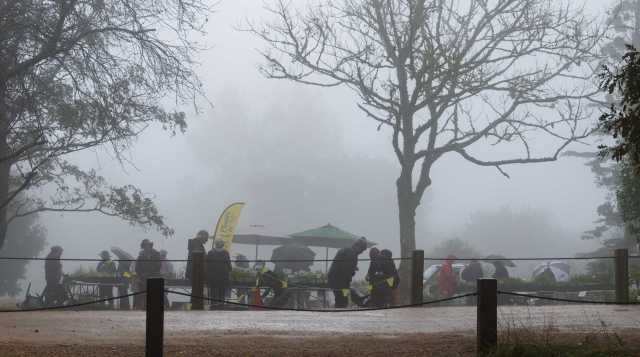 However we attracted three local growers (Seawinds Nursery, Merricks Nursery and Local Native Flora) as well as Vaughan’s from the Grampians and The Plant Hut from Glenmaggie in Gippsland. 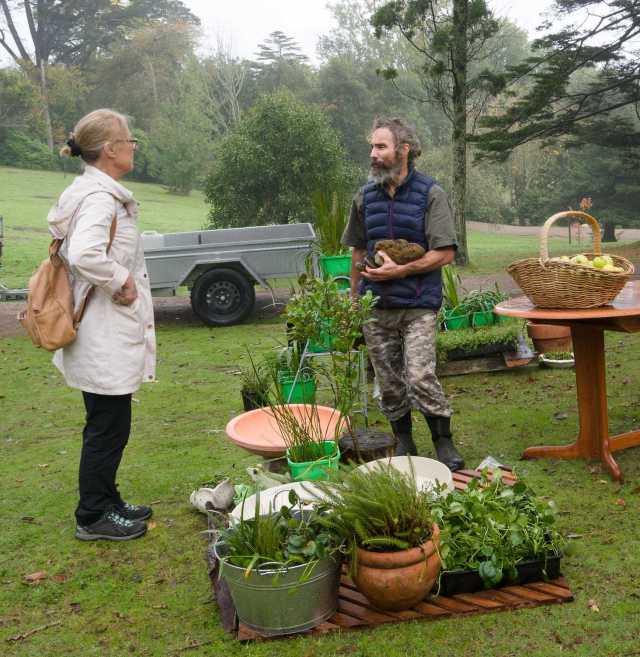 Many members as well as locals patronised the various plant stalls. 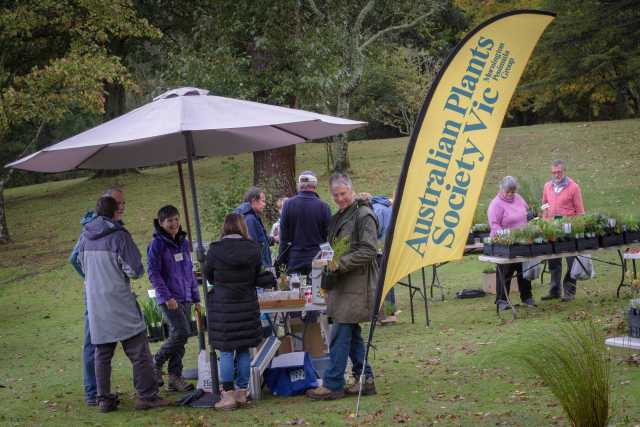 We certainly found a few plants to embellish our garden and we trust you did too. Thanks to the committee members and other members who helped make this a successful event again.

All 15 excursion participants were assembled and ready to go by 10:30 when Maayan Rousso introduced herself to our group. Maayan, in Hebrew, means ‘Rain’ – a rather welcome event in that part of the Middle East – and, I mused, most appropriate for someone so involved with a wetlands environment. 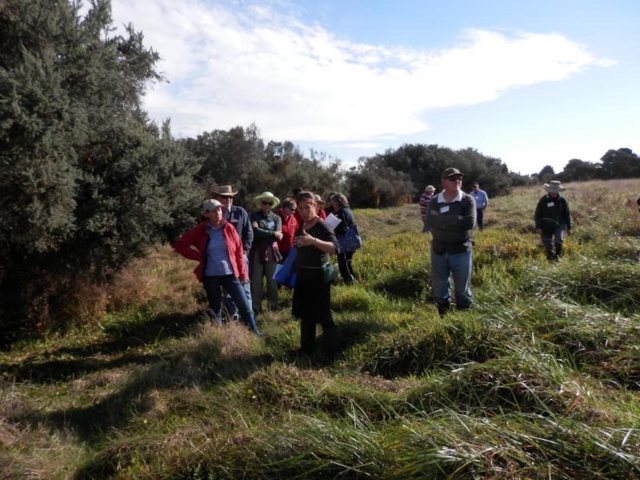 Fortunately the weather was kinder than the showery morning offered by the B.O.M.. Maayan came fully equipped to meet any eventuality, wearing a tools-belt which carried an array of implements ready to dig, trim, slash or pluck out anything vegetable or mineral as required. Included too was a snake-bite kit. But the greatest resource was in her head: her detailed knowledge of every aspect of this environment: the flora, the fauna and the unique delicate fabric of the swamp.

A general physical view of the Tootgarook* Wetlands was illustrated in all its details by a massive aerial photograph that Maayan unrolled, pointing out all the different features. A swamp such as the Tootgarook Swamp is defined as land subject to inundation overlay. The Swamp, which once covered more than 800 hectares is now half that size and much of it in private hands. Actions by some irresponsible landholders in the past caused damage to some areas; these are now being restored. Nevertheless, the Wetland retains its classification as an HBD area (Highest Bio-diversity). There are many government authorities and conservation groups involved in caring for the Tootgarook Swamp, balancing countervailing interests.

While we readied to take off on our walk a harrier and a kestrel could be observed effortlessly gliding and circling in the middle distance, using air currents in their seemingly dilatory but purposeful way, on the alert for prey. Over 150 bird species have been observed over time, deriving benefit from the Swamp’s natural resources. During our excursion, our resident ‘eagle-eyed’ bird observer, David Ap-Thomas, spotted 19 species. 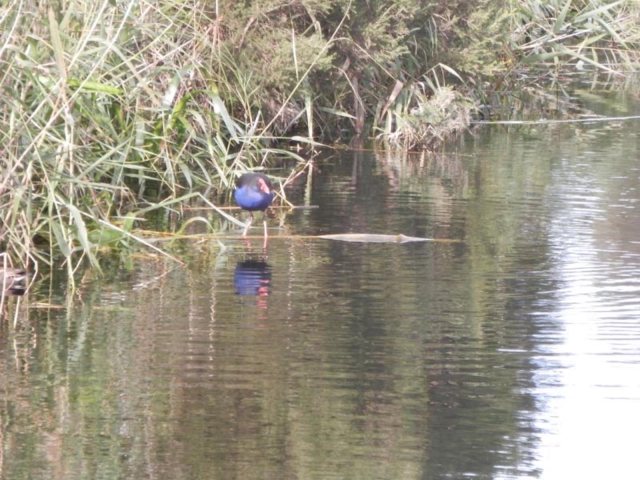 We started off from Elizabeth Street, next to Chinaman’s Creek which is, in fact, not a natural creek but an excavated drain. In its waters a waterfowl floated serenely, ducking its neck occasionally (see photo). During our walk Maayan pointed out a vast diversity of plant-life and their varying roles in the life of this unique eco-system: from Poa to (native) Parsnip; from sedges to Shield Pennywort to Sea parsnip. Many species of Melaleuca and Tea-trees and tall grasses such as Phragmitis australis, among whose large drifts black swans safely nest. There are many species of fish, frogs and also tortoises. 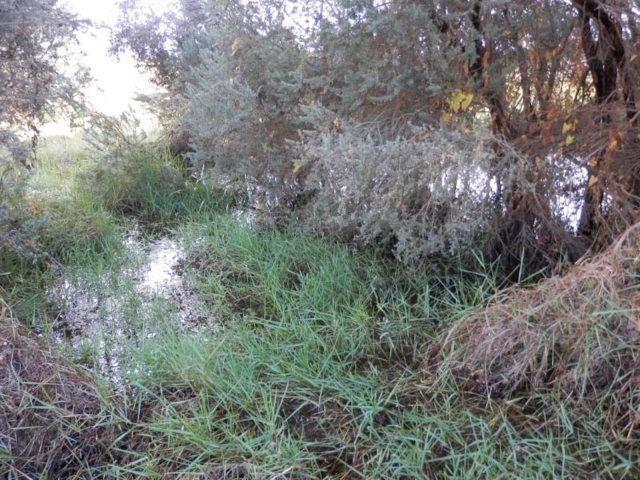 The ground was overall not as wet as I had anticipated but some spots were very soft indeed, with areas which remain saturated all-year-round, except in extreme drought conditions we were told. For our next excursion to this fascinating site (and we definitely must go again) we must ensure that all participants equip themselves with appropriate waterproof footwear. Otherwise, some of the habitats will be out of reach and their full enjoyment of this almost-secret jewel will be lessened. 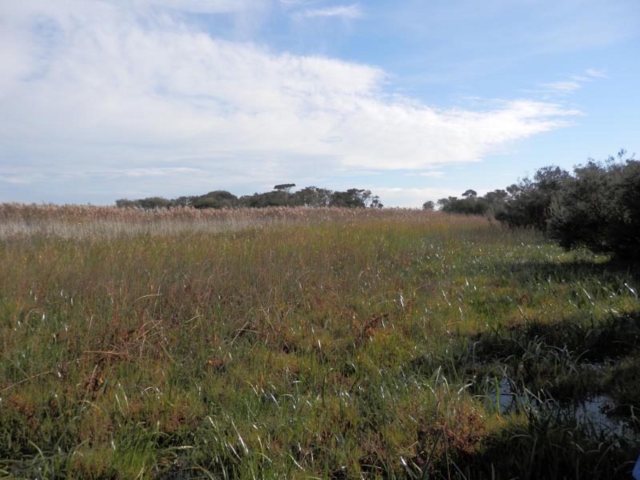 Further reading: There is a wealth of information on a number of well-resourced websites: I recommend starting with http://www.monash.edu.au/dangerousground/ramsar-can-it-save-one-of-australias-last-wetlands/

*Tootgarook is an aboriginal word from the Kulin group of languages meaning ‘place of the croaking frogs’, clearly onomatopoeic.

Speaker Mark Adams, Local Native Flora, spoke on the topic: Frog Ponds and Small Wetland establishment. Some of you will have met Mark at our plant sale. Mark isn’t a regular speaker but due to his knowledge and enthusiasm spoke to the group, supported by a well planned PowerPoint presentation. Mark worked his way through various aspects – picking a good location, (whether that be above or below ground level), soil requirements, suitable plants and creature habitats finishing with how to maintain a healthy pond. 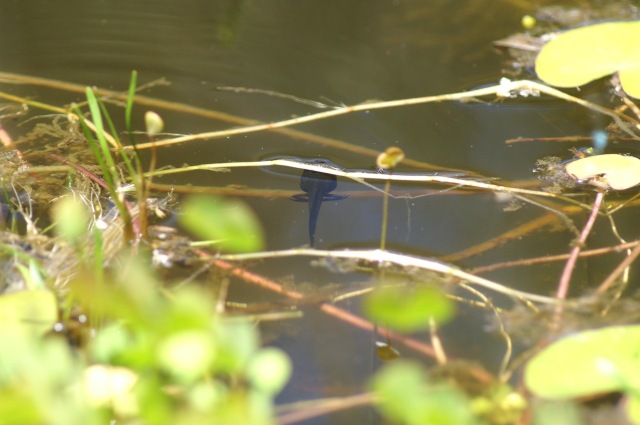 That’s all for this newsletter. Keep warm and hope to see you at one of our upcoming meetings or excursions.

Our next meeting is on Tuesday 16th March at 7:15 at Bentons Square Community Centre (Covid19 situation permitting).

Due to the covid-19 situation our excursion on Sunday 21st February 2021 has been cancelled.

Our next excursion is to Maranoa Botanic Gardens in Balwyn at 1pm on Sunday 21st March, covid 19 permitting.